December's usually a gift-loaded month, with red and white the two colors intrinsically tied with these ubiquitous gifts.  Already well into December, it becomes quite clear that we should be sending a red and white dressed gift your way - and so we shall! 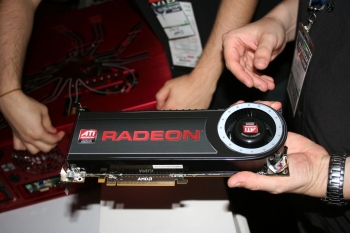 A great gift must be both expected and surprising - not an easy mélange at all; luckily for us the right ingredients were within hand's reach! On one hand, the dual 4870X2 configuration that's going to sweat itself to death (hopefully not, they're cute cards) rendering pretty pictures is the expected part - after all we alluded to this review in the closing statements of the 4870X2 investigation quite a while ago. But wherever could a novelty be extracted from? After all, video card reviews are a rather typical affair ... or are they? Stick around and you'll see that even old dogs can be taught some new tricks.

Alongside the “meaty” portion outlined above, additional sprinklings of spices will be added in order to complete the intricate dish - namely, we'll be looking at the 8.12 Catalyst drivers, which are a milestone build, of sorts, with the obligatory GPU accelerated transcoding of the ... ”educational” movie collection included.

Now, be forewarned that this will be one of those articles that few but the author likes, because it will be long and will include rather detailed explanations that are seldom interesting to the vast majority ... we've tried to balance this flaw with liberal use of rather pretty graphs, but it remains to be seen if they'll prove sufficient.

Is damn hard, and not only when it comes to coffee or music! Even reviews are hard to get right, and we've yet to manage one that is actually as it should be. Delving into the hardware itself at this point in time would be something less than wise; after all, little has changed on that front since the 4870X2 reviews have hit the Interwebs and all details should be well known by now. Quad-Crossfire itself is a fairly old acquaintance, which means its ins and outs won't surprise many self respecting enthusiasts. The testing methods are also typical and commonly employed ... oh, wait, they're not! Actually, they're quite different from what we've been doing, or have seen done, and hopefully they'll end up near the superior edge of the [suck, rock] continuum. So what's this nonsense all about you ask?

The general practice, and one that we've followed up until now, is to provide average, minimum and maximum framerates. Whilst this is a good start, it has become quite apparent that those indicators are hardly sufficient for painting a complete picture: the average itself is quite sensitive to outliers (extreme values that are not necessarily representative for the run/dataset, but impact the average), and minimum and maximum framerates can well be a one time thing. Imagine you'd hit a minimum of 1 fps, but that happens exactly once in a 4 minute run, with all other frames being >60 - how would one quantify that particular case, based solely on AVG, MIN & MAX? As a consequence, we've taken number of steps to ensure that the picture painted via testing is far more representative.

The first, “sharpen-filter”, is composed of 3 extra statistical indicators:

Of course, a picture is worth a thousand words ... so we'll include two and save two thousands:

What you see on the left is what happens when the average is affected by an outlier: the data set we used was {25,25,25,100}. The average, in this case, is equal to 43,75: hardly representative for the experience. However, the Median and the Mode are both equal to 25, which produces a far more accurate synthesis: we know where half of the data set lies, that at most half of the values will be less than this, and we also know that most of the time the user experienced 25 FPS.

Moving to the right, you see three data sets that share the same 25 FPS average, but the end-user experience between the three would be quite different indeed:

Using the above three indicators should add more weight to the measurements we currently employ for gauging a GPU's performance. However, the exploration must go further, and to do so a histogram would be quite helpful: we'll be able to show exactly how framerate evolved during the benchmarking run. You'd think this is it, but there's one last topic that needs tackling ... and a rather troublesome topic it is.