Xigmatek
Welcome to another Caveman Review for Rage3D! Today we'll be looking at an aftermarket heatsink and fan combo, the Xigmatek HDT-S1283. This tower heatsink uses three heat pipes and a 120mm fan to cool your CPU, so its fair to expect it to perform far better than the 70mm fan equipped stock AMD cooler we're pitting it against in this comparison. 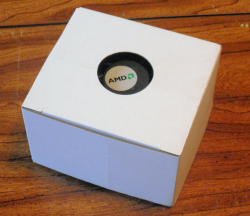 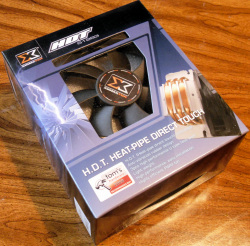 In this article we contrast stock and overclocked temperatures of an AMD Phenom II 940 BE in a Biostar TA790GXB A2+ AM2+ motherboard. The system was enclosed, using an Antec 300 case fitted with an Antec Earthwatts 430.

This thermal advantaged case is altered from stock configuration, with the rear fan being relocated from its rear exhaust position to the side panel as an intake fan. Two additional front fans were added, 120mm Yate Loon low speed fans, as intake. Rounding out the configuration, it's equipped with a Western Digital 80Gb 3.5" SATA-II 10,000rpm Raptor using AMD's 750SB in AHCI mode, upon which Vista Ultimate x64 SP2 was installed to take advantage of the 4x2Gb Geil DDR2-800 RAM. No optical drive, no floppy drive, no discrete video card; this system is for office productivity, transcoding and CPU intensive tasks - maybe a bit of very light gaming or movie watching on the integrated HD3300.

AMD Stock HSF
After establishing a baseline temperature reading at idle for 10 minutes, we used Prime95 2.58 x64 to run four threads of in-place large FFT tests to load up the CPU and see how hot it gets. This was allowed to run for 30mins, to saturate the attached cooler. We then observed the recovery time: how long to return to the baseline temps, if at all. The results graphs were generated from the raw data by taking minute apart samples for the five minutes preceding the initiation of Prime95, during, and for ten minutes after.

AMD's Cool'n'Quiet and Advanced Clock Calibration (ACC) features were disabled for the tests, but for real world use at stock speeds I recommend to enable Cool'n'Quiet. The tower was located under my desk as a "real world" configuration - not many people use their rigs on a bench without a case, or in front of a cooling vent.

AMD claims a 125W TDP rating for the Phenom 940 Black Edition. This means that under their standard for real world conditions the cooling solution will need to be able to dissipate up to 125W of heat. Before the AMD Phenom code-name Barcelona, AMD's TDP ratings where theoretical maximums. At the launch of Phenom, AMD adopted Average CPU Power (ACP), which AMD claims is more in-line with how competitor TDP ratings are estimated. What does that mean to the average Rager? Will you need to consider a bigger heat sink and fan if you want to keep that BE cool'n'quiet?