Editor's Note: ChrisRay, a contributive member at Rage3D since 2003, brings to the table the insight gleaned during his many years on the enthusiast scene. ChrisRay is administrator at Nvidia's SLI Zone, an Nvidia User Group Member, and a valued member of the video hardware community.

Its been several years since the Geforce 8800GTX first took the graphics industry by storm. We have seen incremental upgrades, such as the 9800GTX, which brought 8800GTX performance to the masses as well as multi GPU cards, such as the 9800GX2, which brought SLI to one board. However each improvement seemed to be accompanied by new drawbacks. For example, the 9800GX2 delivered great performance but relied on AFR for performance as well as being limited to 512MB of memory, a step back from the 768MB available on the 8800GTX. Today Nvidia launches the Geforce GTX 260 and Geforce GTX 280. Are they the true heir apparents to the 8800GTX?

What's in a name?

A cursory look at the cards reveals them to be visually identical, with the same cooler and VGA/DVI connectors. But, just like a hotrod, under the hood is where to find the differences. The GTX260 has part of its shader/ROPS/Texture units cut off in comparison to the GTX280 and only requires two 6 pin connectors; the GTX280 requires both 1ea 6 pin and 1ea 8 pin PSU connectors. Lets next take a closer look at the technical specs to see the differences in detail. 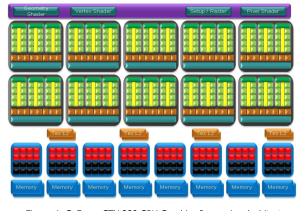 At a glance you can see why these chips carry 1.4 Billion transistors. The shader count has been massively increased and the ROPS have been doubled compared to the Geforce 9800GTX. The GTX280 features 1GB of available memory. The GTX260 has had 2 of its clusters disabled. As a result the stream processors, Texture Map units, and ROPS and memory bus have been cut slightly while only featuring 896MB of memory. The GTX260 is very similar to the 8800GTS 640 that was featured with the Geforce 8800GTX launch. The Geforce GTX280 has 141GB of bandwidth while the Geforce GTX260 carries a more conservative 112GB of bandwidth.

With the Geforce 8800 and Geforce 9800 series, each shader was capable of performing 1 MADD per clock. While under certain circumstances it could perform a "Mul", most of the time this Mul function went unexposed. With the GTX200 series, the Mad + Mul functions for each unit is fully exposed under all circumstance. This can lead to a performance improvement from the shaders clock per clock. The range seems to vary from 3-15% dependent on the type of shader being rendered, keeping mind that those numbers are just based on a few limited tests. Its difficult to quantify how much this will matter over a wide range of titles.

Internal Buffer structures have been upsized by 6x. This should provide a significant improvement to streamout performance.

The register space on the G200 shader array has been doubled, which should allow for better performance in heavy shader utilization situations as well as open up support for Double Precision.