The last time we chatted about all things ATI we wanted to look under the IHS and, when it comes to the intricacies of Radeon silicon, there's no better person to ask than Eric Demers. Of course, hardware without good software is more or less useless, so it's time to peek into the .DLL ... we've chosen the best person to tell us about the reasons for which Gothic 3 still has no CF profile (:P): Andrew Dodd.

We could tell you many things about Mister Dodd, but we won't since he's quite able to introduce himself:

Before proceeding, we'd like to add that he's the guy that has the pleasure of being the first to hear about the things we've managed to break during testing.  He's also a very nice guy, and not just because he puts up with our antics. Keeping that in mind, time to see what we managed to uncover!

Rage3D: Hello Andrew, it seems we finally get a chance to pick your brains! Before we get to anything else, we'd like to congratulate you on recently unlocking the “Be a father” achievement :)

Andrew: Thanks very much for giving me the opportunity to give you an update on all things related to ATI Catalyst!  Fatherhood is a fantastic experience, but can also be a little tiring to say the least!!  ;-)

Rage3D: You've been with ATI for quite a while, haven't you? What was it like back in the day, when you were “haxxoring” Radeon 8500 drivers, compared to how things are currently, as you're trying to get the best out of the 4800 Series?

Andrew: Yes I’ve been with ATI, and now AMD for 8 ½ years!!  It’s pretty amazing how many product launches I’ve gone through.  At the time of the ATI Radeon 8500 launch, ATI Catalyst didn’t even exist yet, so things were definitely a little more challenging.   At this point our software team is like a well oiled machine, everything runs very smoothly, and as you know we’ve been posting monthly drivers for the last several years now.  So developing drivers for the ATI Radeon HD 4800 Series (although it’s still a significant effort) went quite smoothly.

Rage3D: Tied to the above: how large is the driver team nowadays? Would you consider costs and complexity of driver development to follow a linear evolution throughout time, or a non-linear (insert your favorite non-linear function here) one?

Andrew: I’m not sure what algorithm best represents the growth of the software team  ;-)  but I can tell you that our software team is approaching the size of the hardware team, so that gives a great indication just how important software is in delivering the final product.

Rage3D: Why Catalyst? Why still Catalyst, after all these years? (the naming is the object of this question)

Andrew: Catalyst is a great name, I think it quite nicely reflects the role the graphics driver plays in the graphics accelerator and PC ecosystem, so why change something that works so well?

Rage3D: The monthly release schedule you've committed yourselves to has come under scrutiny in recent times, with claims that it's reducing the overall quality of your drivers/making your validation process too cursory - how would you reply to that? Do you still think monthly releases are the way to go? Could you quantify how demanding it is for you guys to meet that fairly lofty goal?

Andrew: I think our commitment to deliver a new WHQL certified driver update every single month is great thing for our customers – they know every single month they’ll get a new driver that may improve performance, or deliver a cool new feature, or fix a certain issue they may be seeing.  It requires a lot of development and testing time, but it’s a great benefit to our users, so we’re committed to continuing to deliver ATI Catalyst updates every month.

Andrew: We have a software team dedicated to ATI CrossFireX support, so it doesn’t make it any harder using a Multi-GPU solution for our top end products.  In fact in certain ways it makes it easier overall because once you’ve got a single GPU performing well, in many cases those optimizations will just automatically work for the multi-GPU case (obviously this requires the CrossFire infrastructure to exist in the first place).

Rage3D: Could you describe the exchanges you typically have with the hardware guys? Namely, after they see you “bug” their lovely transistors, do they come into the office wielding axes? Or, if the reverse happens, and you squeeze an unexpected +200% performance boost, do they bring the champagne? :)

Andrew: Everyone works very closely, and everyone is trying to help and work together to deliver the best product we can, so it’s really a team effort the whole way. 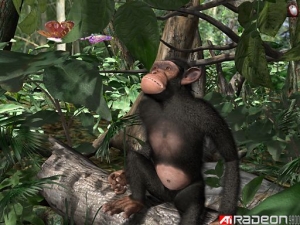 ATI drivers, back in the day, were similar to this here chimp: interesting, but unappealing

Rage3D: Some love the Catalyst Control Center; others hate it with the burning passion of a thousand suns - how do you feel about it, now that quite a while has passed since its release? Do you still feel it has room for growth? Are there things you'd like to see in that are still missing?

Andrew: There were two major factors that held back the ATI Catalyst Control Center when it first launched: 1) its performance was slow, and 2) it required .NET to be installed, which was a hassle at the time under Windows XP.  We resolved the performance issues that existed with CCC a long time ago, and all of our XP users now have .NET installed, and of course Windows Vista includes .NET as part of the OS, so that’s not a problem any more.

There are always more features I’d like to add to CCC (and of course I can’t talk about upcoming features), and it’s something that’s going to continue evolving – there will never be a time when CCC is complete, we’ll always continue to add new features and make UI changes/tweaks.

Rage3D: Optimizations are still a stingy topic, after the dark-ages of Quack/3DMack. Would you mind explaining to the world why they are quite necessary, as long as they are proper optimizations and not IQ degrading hacks, and how often you have to go fix somebody else's less than great approach?

Andrew: This topic has been covered a great deal over the years and the answer is still the same – driver optimizations are necessary and a great thing as long is it improves the performance of the application without affecting the image quality is any negative way.