We're 10 years old now and, unfortunately, there are those that think gaining in years and wisdom means you need to act a little grown up as well. Hrm. We'll see about that. Anyway, the point is that we desparately need a cool tagline so the other big kids won't make fun of us! Time to step up and thwart the bullies!

Oh, and although we know the eternal glory of being the one to generate Rage3D's new tagline is the only thing you care about, we also thought some prizes may help getting the creative juices flowing ... courtesy of our wonderful friends at ATI: 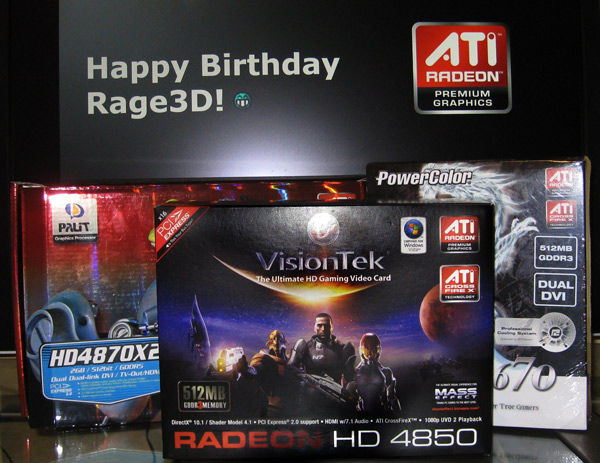 Okay, you know the drill - post your ideas in the New Rage3D Tagline thread before the clock hits midnight, October 29th! Looks like enough awesomeness in that pic to offer awards to the top three finalists ... so get your busy on! We'll announce the winners the week of Nov. 2nd!

Submit your entry in the Save Rage3D thread!

Rage3D thanks Dave, Terrence and everybody else at AMD: YOU GUYS ROCK!

So many entries, some of you apparently attempting to prove the infinite monkey theorem, that we had to call in for reinforcements! Wowsas!  Seriously though ... some amazing entries, and a shame we had to limit this to three winners when there were many more than three deserving entries.  Without further ado ...

Whew, that was close. Just shy of the deadline w/ the bullies knockin' on the door. Congratulations to our winners!

Finally, another big thanks to the AMD crew that helped make this happen, and to each of you who make Rage3D the Home of the Pixelhead Society!